ERC Team Members Help Save the Day for Artemis Launch 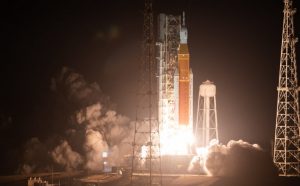 November 16, 2022- NASA successfully launched the Artemis I uncrewed test flight early this morning. After two scrubs and two hurricanes, the Space Launch System rocket finally got to show what it could do. Now it’s up to the Orion spacecraft that is starting an almost month-long trip around the Moon. Though years late and billions over budget, today’s launch is the beginning of America’s return to the Moon almost exactly 50 years after astronauts last walked on the surface.

Artemis lifted off from Launch Complex -39B at Kennedy Space Center at 1:47:44 am EST.

The launch was delayed for 43 minutes due to several glitches during the countdown. The most troublesome required a three-person “Red Crew” team to go out to the launch pad while the rocket was fueled to fix a leaking valve. Billy Cairns and Trent Annis, cryogenic engineering techs, and Chad Garrett, safety engineer, had to tighten packing nuts on the replenish valve for the Core Stage Liquid Hydrogen system. It would have been a scrub if the valve wasn’t fixed. The three, who work for ERC as part of Jacobs Engineering’s contract with NASA/KSC for ground support services, are being hailed as the heroes of the day.

The launch was both a joy and a relief. Two earlier attempts were scrubbed on August 29 and September 3, and the SLS/Orion stack survived two hurricanes, Ian and Nicole.

Now it is safely on its journey, though launch is just the first step. There’s much more to come in the days and weeks ahead.

Orion, with its ESA-provided Service Module, still must make a series of manuevers to get to and from the Moon and survive a fiery reentry through Earth’s atmosphere.

No one is aboard this flight. The Orion spacecraft is filled with scientific experiments including three instrumented mannequins to provide data on what humans will experience when they make the trip on Artemis II.

NASA hopes to launch that mission in 2024 and in 2025 send astronauts back to the surface. While many are skeptical of the timeline, the goal of returning humans to the Moon and going on to Mars won bipartisan support in the Trump and Biden Administrations as well as Congress.

On this mission, Orion will spend 26 days traveling around the Moon and returning to splash down in the Pacific Ocean as its Apollo predecessors did.

It’s taken this long to get policy and funding aligned for another try. Times have changed and NASA touts the differences from Apollo. Artemis, named after Apollo’s twin sister, will send the first woman and the first person of color to the Moon, not only white males. Artemis is international, a demonstration of America’s leadership in space, not a singular achievement to best a Cold War rival. And Artemis more fully embraces the commercial sector, relying on Public-Private Partnerships for critical components like the lunar landing systems, not a purely government-driven program of cost-plus contracts.

SLS and Orion were built under traditional contracts, however, and have been plagued with cost overruns and schedule slips for years. NASA’s Inspector General Paul Martin puts the cost of this launch at $4.1 billion and the same for each of the next three.

Debates over the cost of SLS/Orion especially in this new era when private sector companies are developing their own big rockets, like SpaceX’s Starship, undoubtedly will continue, but for this moment, the Artemis I launch is a win for the NASA-industry-international team.

After 50 years, a spacecraft capable of carrying humans, is once again on its way to the Moon.

Orion’s 26-day journey will take it on a circuitous route. 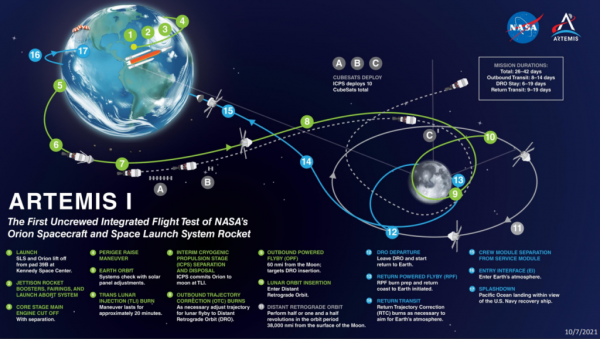 The purpose of the flight is to demonstrate Orion’s systems without a crew to ensure that when astronauts are on board they will have a safe re-entry, descent, splashdown, and recovery. Key to that is testing Orion’s heatshield in the actual environment it will experience returning from the Moon at 25,000 mph (11 kilometers per second), producing temperatures of approximately 5,000 degrees Fahrenheit (2,760 degrees Celsius). On this flight it will test a skip reentry, allowing it to land closer to the U.S. coast.