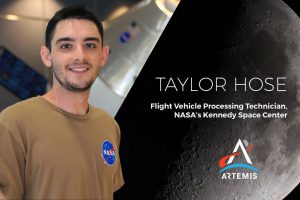 Taylor Hose is a man on a mission. After seeing a space shuttle launch when he was six years old, Hose decided he wanted to be an astronaut. All his moves since have focused on human space exploration.

In 2009, as a ninth-grade student in West Virginia, he made it to the state science fair with his aerospace engineering project. He followed that up with trips to international science fairs in 2010 and 2011.

“At that point, I decided I could make a career out of this,” Hose said.

Hose, an ERC employee, works on the Jacobs Test and Operations Support Contract as a flight vehicle processing technician at Kennedy Space Center. He holds two degrees – a Bachelor of Science in multidisciplinary studies from West Virginia University and a Master of Science in space studies with a concentration in astronomy from American Public University. Neither of those degrees is required to be a flight vehicle tech, but Hose said he is glad that’s where he has landed.

“I applied for hundreds of jobs at Kennedy – anything related to the space program,” Hose said.

His passion and dedication have served him well. Since joining the Kennedy team in 2019, Hose has achieved high marks supporting the effort to prepare the Orion crew module and service module for the Artemis I launch. He recently helped to mate the Launch Abort System to Orion, before sending it to the Vehicle Assembly Building, where it was stacked on the Space Launch System.

Hose is one of just three people on the ground systems team who is certified as an Orion hatch operator, and he has been assigned to NASA’s Exploration Ground Systems Landing and Recovery Team, which will recover the Orion capsule – and crew in later missions – from the Pacific Ocean after splashdown.

“I can’t begin to express how much I’ve learned in the last two years,” Hose said. “Starting out as a technician, the hands-on work helps me to view problems in a different manner. It has changed the way I think.”

Hose said he is especially impressed by the amount of effort that goes into preparing the flight hardware.

“We have worked long hours and long days since well before the flight hardware arrived. It takes dozens of technicians, engineers, quality and safety personnel,” he said. “We are putting humans in space, and the safety margins are outstanding. Everything is meticulously conceived and performed and vetted in order to get people to the Moon in a safe and efficient manner.”

Hose applied to the astronaut program during the last round and plans to continue applying at every opportunity as he builds on his experience and expands his educational resume.

He views this technical experience as excellent training. “It will help to understand how all the systems work,” he said. “On Mars, we will need someone who can fix things without having to talk to mission control.”

Check out some of our other I am Artemis features.